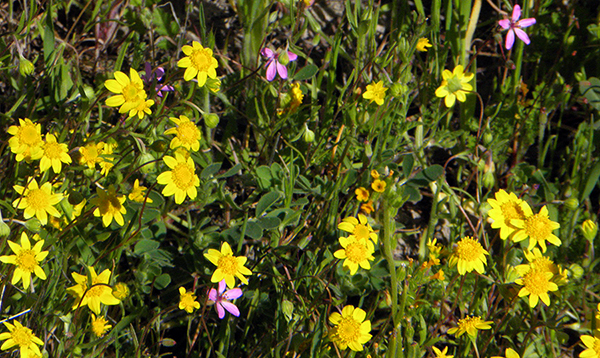 In my last post, California Goldfields blankets huge swaths of land with yellow. And yet they are tiny flowers. Some say the Golden State was named for great springtime blooms of Goldfields throughout California. 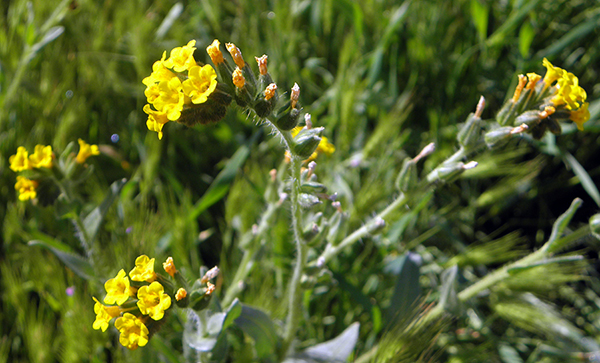 One of the first spring wildflowers to bloom in spring on the Plain is already starting to go to seed. We saw this Common Fiddleneck at almost every site we visited on the Plain, either nearby or in distant fields. 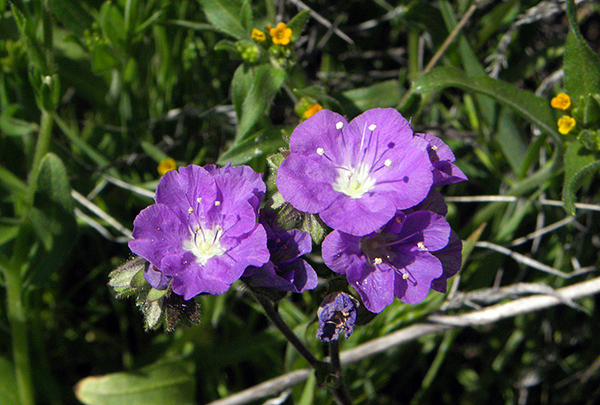 The graceful and beautifully-named Chinese Lantern Phacelia adds a lovely purple counterpoint to the vast fields of yellow and gold throughout the salt-encrusted soil near Soda Lake. 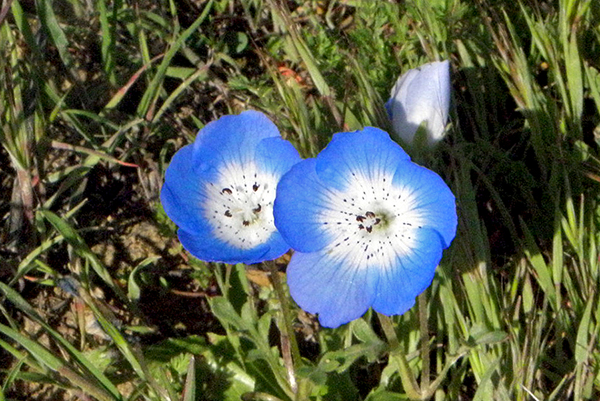 Baby blue eyes appears in large numbers, but only at select sites. Throughout California their characteristics vary, with colors from deep blue to white, and dot patterns from extreme to nonexistent. 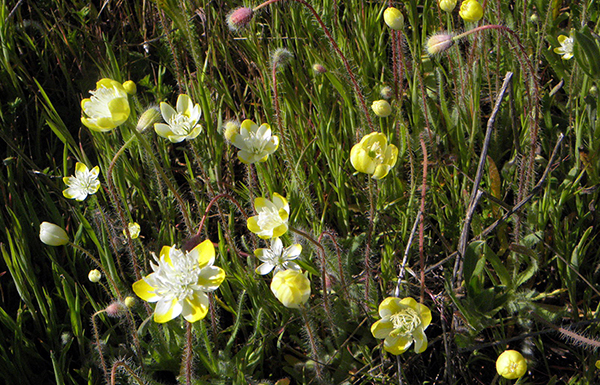 At first I imagined these variegated blooms to be hybrids of nearby flowers. But Cream Cups are a naturally-variegated component of the spring wildflower bloom throughout arid parts of California. 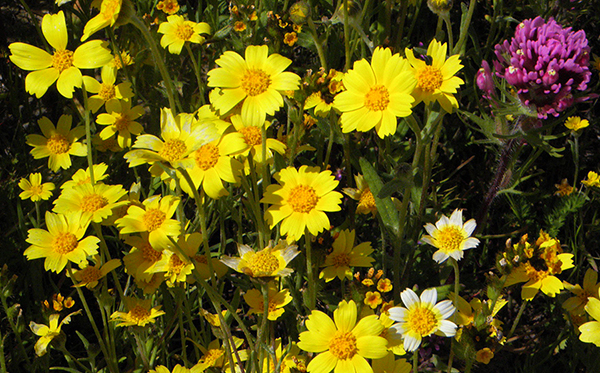 So many yellow flowers! It’s difficult for the casual botanist to differentiate the species, and sometimes even to see all the species. I identified these yellow Hillside Daisies, possibly correctly, by their habitat as well as their form. 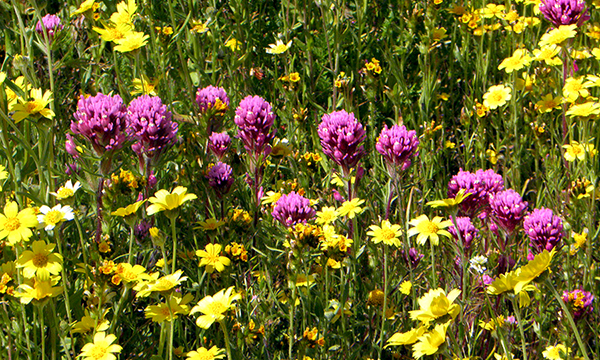 Purple Owl’s-Clover, often more magenta than purple, is a striking contrast to almost any other wildflower. Not really a clover, it’s related to Indian Paintbrush. It’s said that its tiny white blossoms resemble an owl’s face. 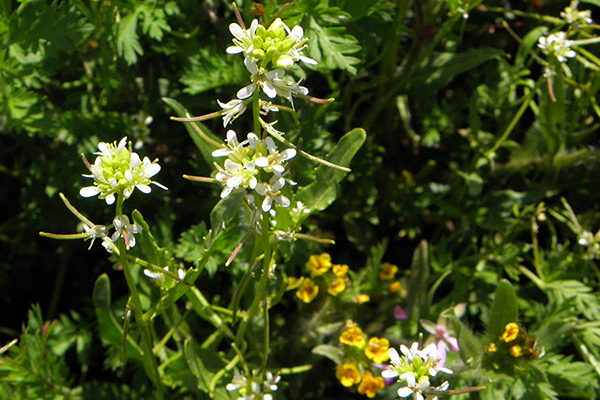 Yellow mustard fields in California, lovely as they are, are made up of invasive species from Europe. However, this delightful California Mustard is native. It is rarely abundant enough to form fields. 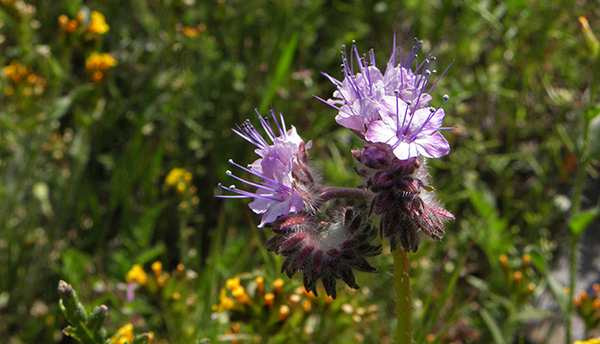 Arid parts of California are filled with Phacelia, a sticky and charming plant that unfurls blossom after blossom from a fuzzy curled stem. This is likely a Lacey Phacelia, or possibly Tansyleaf Phacelia. 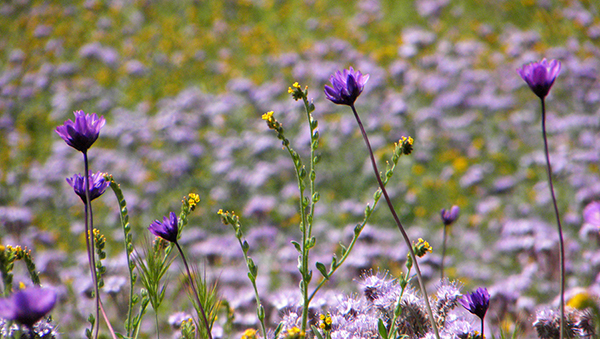 What a delight to be standing on a hillside, pushing my telephoto capacity to the max. We saw very few of these Splendid Maricopa Lilies, and could not get close to them without treading too heavily on the fragile environment. 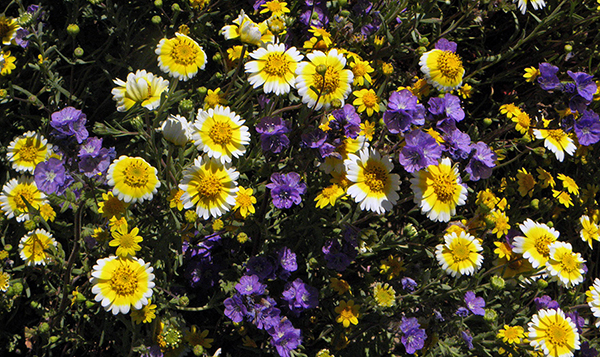 California wildflower aficionados will wonder, “Where are the Tidy Tips?” This desert classic was just coming into bloom, complimented by Chinese Lantern Phacelia and the ubiquitous California Goldfields.